If you do not agree that the parliament of Lithuania supports the actions of apartheid state of Israel and the occupation in the name of Lithuanian people – come along and say NO to them.

We use a phrase from a musical poem by Jonas Mekas “I am a Palestinian” as a protest slogan seeking in this way to express our solidarity with the people of the occupied Palestine and Palestinian refugees, who are not allowed to return to their homeland by Israel.

We encourage everyone to join the protest.

Racists, haters and supporters of violence are not welcome.

Then come along to the Vincas Kudirka Square this Saturday and strongly express your position.
If not us, then who?

WE ARE NOT ALONE. There are millions of us in the whole wide world.

The weather forecast for Saturday is rain. Don’t mind getting a little wet – for we live in Lithuania – the land of rain 🙂

During the last two weeks, Israel has killed over 200 Palestinian people attacking them with bombs and rockets.

At least 60 of them were children of Gaza. Also several Palestinians were killed by the Israeli Defence Forces in West Bank. Israel is attacking and bombing the hospitals, roads, civilian houses in Gaza. Over 38 thousand people have lost their homes, the majority of whom are the displaced refugees in their own land.

Israel justifies their criminal actions as “defence”. However, what kind of excuse is “defence” if you are the occupier?

We say NO to apartheid. NO to occupation. NO to colonialism.

What you can do NOW

Sign the petition – the statement that responds to the Ministry of Foreign Affairs of Lithuania to stop supporting the criminal actions of Israel. (As of 2021-05-20 12:30 PM, there are 406 signatures already!)

Share the information with others, invite your friends, brothers and sisters, colleagues, neighbours to come to the protest.

Nelson Mandela the survivor of apartheid, once said:

“We know too well that our freedom is incomplete without the freedom of the Palestinians.” 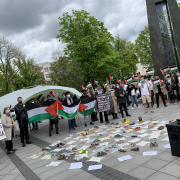 Karolis Vyšniauskas, NARA “I am a Palestinian” protest video

Say NO to the Lithuanian Parliament’s support for Israel